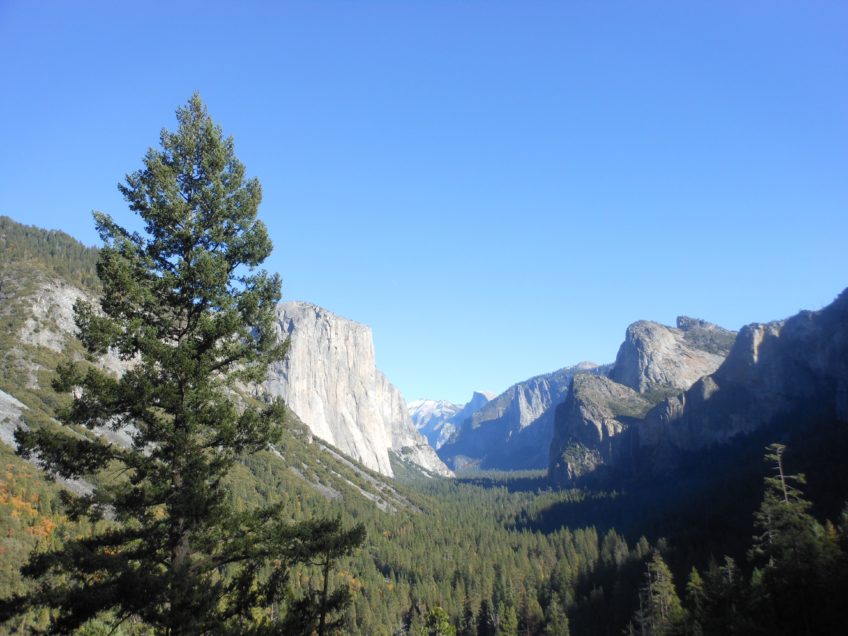 Yosemite is the Life Detox Mantra. Yosemite is a magical valley with beautiful meadows, awesome greenery, wonderful waterfalls and granite cliffs. The Tunnel View @ Yosemite presents the picture perfect view of Yosemite. Mariposa Grove takes us to another era. Giant Sequoia trees make you feel humbled yet amazed and happy !

Saturday-Sunday was going to be a great weekend as Yosemite was our weekend destination. I woke up at 4 am on Saturday and we left the home at 8 am. We got the gas and started our drive to Yosemite. We took a coffee break at Starbucks on the way. We spent 30 minutes there and moved on. The small villages on the way were beautiful. The traditional shops, the churches, the farms – all made a good sight. As we started reaching towards Yosemite, the sights were turning beautiful. Huge trees. Total greenery. It was very very refreshing. The drive itself made you feel good. The giant trees made you feel that this was a different world. A different era. Lovely.

We reached Yosemite at 1 pm. Yosemite National Park is a UNESCO World Heritage Site. It is a huge national park covering an area of 761,268 acres. Yosemite is internationally recognized for its spectacular granite cliffs, waterfalls, clear streams, Giant Sequoia groves, and biological diversity

It takes a lot of time to travel within different areas of Yosemite. Our first stop was Bridalveil Fall. Yosemite is famous for its high concentration of waterfalls in a small area. The most prominent of the Yosemite Valley waterfalls was Bridalveil Fall, which was the waterfall seen from the Tunnel View viewpoint at the east end of the Wawona Tunnel. Wapama Falls in Hetch Hetchy Valley is another interesting waterfall, which we saw the next day. The Yosemite Falls is the highest in North America at 2,425-foot (739 m) – that also we planned to see.

The next stop was Mariposa Grove. On the way, we stopped at Tunnel View. It has the picture perfect view of Yosemite Valley. The Mariposa Grove has giant sequoia trees. This species grew larger in volume than any other and are one of the tallest and longest-lived. Mariposa Grove was indeed wonderful. The huge sequoia trees were hundred of years old. Trees that were like giant trees from Jurassic Era. These trees had their roots very deep into the ground. Their roots could spread across miles. The trees had layers of barks. Each season a layer would be added. Researchers could look at bark and determine the seasons that tree faced and the duration of the each season. The thick barks also helped the tree to survive in case of the forest fires. Forest fires were frequent and they helped in the emergence of new trees. For a few decades, the forest department stopped the forest fires. After a few decades, they realized that the growth of trees stopped and no new trees emerged. The balance was disturbed and other trees emerged. Now they allow the forest fire to happen and also simulate natural forest fire.

We saw some wonderful examples of Sequioa Trees and unique shape formed by them. And they were beautifully named and marketed by smart US Marketers ! Some of the names were :

The Grizzly Giant – a huge tree that was between probably 1900–2400 years old. It was the oldest tree in the grove
The Fallen Monarch: A tree that fell more than three hundred years ago. Giant sequoias are resistant to decay, so their remains can linger for a long period of time if undisturbed.
The Bachelor and Three Graces: A group of four trees, three of them growing very close together, with a fourth a little more distant. Their roots are so intertwined that if one of them were to fall, it would likely bring the others along with it.
The Faithful Couple: A rare case in which two trees grew so close together that their trunks have fused together at the base.

After visiting these trees, we moved towards the Tunnel Tree. By this time, we had trekked for 0.8 miles. There was a another Fallen Tunnel Tree at 2.1 miles. We decided to continue the trek.Our initial mental resistance and physical tiredness made the trek difficult. The last 0.5 miles were the most difficult. The elevation increased quickly. Finally, we reached the Fallen Tunnel Tree point. I got the same feeling as when I visited Eiffel. It was a letdown – after all the effort. However, as philosophers say, the journey is the most important thing than destination. We enjoyed the trek. We could achieve more than 5 miles of trek after a long journey, long day etc. This boosted our confidence for the next day’s trekking.

After the trek, we decided to have an early dinner and go to the hotel. We decided to go to Curry Village. It was a 10 minute drive. The most interesting thing to note was that darkness descended very quickly. At 4:30 pm, it was nice and warm when we descended the trek. As we were on the way, by 4:45 it was getting dark. At 5:00 pm, it was dead dark and dead cold. The importance of Sun could not be over-emphasized. Even during the trek, the place with sunshine was enjoyable and usually full of life. Whereas the place in shade would be cold and dull. No wonder Sun is the most important source of energy and centre of our universe.

We reached the extremely cold and wet Curry Village at 5:15. We had cold vapors from our mouth. We directly went to the Pizza Joint. We had a large Veg Pizza – which was very large – all three of us could not complete it. I enjoyed the Hot Chocolate with my Pizza. Nothing like a great food after a day of long work and hunger. Nothing like hot and delicious food in the cold environment. We relished our expensive but great meal. We took the journey to our hotel – another 30 minutes. We purchased some groceries from the hotel and went towards our room.

A young lady and young teenager came running towards us. They were shouting that there was a large black bear in their building lobby. The lodge had six to seven main buildings, with lot of rooms in each one of them. This particular building was right in front of the Merced River and the bear had entered the hotel from the riverside. We were too tired but apparently the hotel staff came and helped to send back the bear.

After a change of clothes, I hit the bed and was fast asleep in few minutes. We slept at 8 pm !

However, I woke up at 2:30 am. The hotel had no network and hence I could not make any phone calls. We had had not brought our laptops. So I had nothing to do. I caught up on some reading and got back to sleep. I again woke up at 5 am.

We checked out of the hotel at 8 am. We had our breakfast of fruits and snacks from the last night’s grocery purchase. Based on the maps and guide, we decided to explore Yosemite Falls and Yosemite Valley. Also, we were told to visit Mirror Lake Trek – it became our first place of visit for the day. We had to park our car at Curry Village and take a shuttle to Mirror Lake Trek Bus Stop. At Curry Village, we first decided to have a hot coffee. I decided to taste Chai Tea Latte and it was one of the worst ones tat I ever had – but it was hot at least ! We took the shuttle and started our Mirror Lake Trek from the designated spot. The trek seemed quick and fast. Though due to early morning, we felt cold. We reached The Mirror Lake – it turned out to be another dampener. It was bigger than a small puddle of water and it had reflection of Half Dome and other mountains. Hence it was called the Mirror Lake. We came through the Trek route. On other side was the proper road – we could have driven to that place as well.

We headed back to the Curry Village to take the car. We went to the local shop for some souvenirs. Our next stop was Yosemite Falls. It was a small trail. But I decided to climb the rocks surrounding the falls. We enjoyed that part more. After a good time at Yosemite Falls, we watched the Yosemite Valley. It was a huge valley. Yosemite indeed was a great place. El Captain, Half Dome, Sentinel Dome are the famous Granite Domes and are popular rock climbing destinations. The high country consists of beautiful meadows.

The Glacier Point and Tioga Pass were closed due to snow. Thus we had nothing more to see. We decided to go to Hetch Hetchy Reservoir and Dam. Hetch Hetchy Valley is a glacial valley in the northwest corner of Yosemite National Park in California. It is currently completely flooded by O’Shaughnessy Dam, forming the Hetch Hetchy Reservoir. The Tuolumne River fills the reservoir. The Dam on the Reservior was built within three years. This Reservior provided the water to the entire SFO Area including Freemont and the 2.4 million people in these areas. So I was having water from this place ! It was built very quickly. The engineer had built a power plan as well. He also designed a railway track to expedite the flow of the material and men for the dam between the power station and the dam site. The power-generation facilities and transmission lines are concealed to protect the valley’s famous scenery. 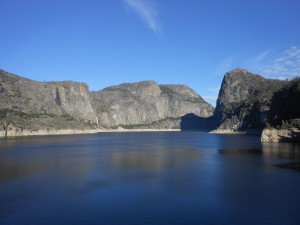 The place was too silent and too beautiful. It was so silent that I noticed how much noise we have in our lives. And our India. This kind of serene silence and tranquil peace seemed a dream in India ! wonderful.

We identified a new point – Novel Point – a beautiful place overlooking the reservoir, under the shades of tree, where one can enjoy a Novel on a hammock.

With a heavy heart, we returned from Yosemite. A place that will call me again !