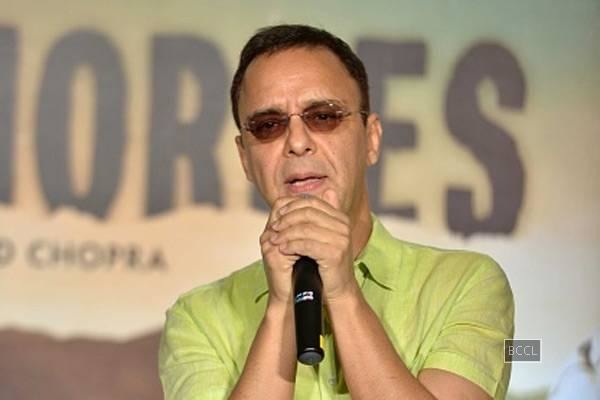 Vidhu Vinod Chopra was the Guest Of Honor at the ‘In Conversation’ interview session hosted by the National Indian Students Union UK and SOAS South Asia Institute. The evening discussion was chaired by renowned author and SOAS’ Professor of Indian Cultures and Cinema – Professor Rachel Dwyer.

Vidhu is the first Indian filmmaker to write, produce and direct a Hollywood film. Vidhu Vinod Chopra’s emphasis during the entire evening was to drive the point that Indian cinema can match Hollywood but we choose to speak our people in our language. Our Indian people are different and hence Indian cinema is different. Expressing love through song and dance is normal – he also did the same in his early days. Indian cinema is not deficient or subservient – It is different.

His motivation for Broken Horses was the same mantra. Hollywood has looked down upon Bollywood. There are prejudices. He wants to break those. He wanted to tell the world that an Indian can produce a Hollywood movie. A Hollywood movie that only had Vidhu as an Indian name in the entire credits – all lead actors, crew and team were Hollywood. The movie was also a true blue mainstream movie – not a diasporic or NRI linked themes.

Vidhu Vinod Chopra’s earlier movie Eklavya had an impact in Hollywood. It was India’s official Oscar entry as well. It led to opening of few thoughts for a Hollywood movie. And after viewing a screening of The Departed, the urge grew stronger. Abhijat Joshi and Vidhu started worked on a script. Parinda was the initial inspiration (Parinda was also nominated at Oscar) – but after 63 drafts – the 64th movie emerged which was Broken Horses.

Professor Rachel Dwyer brought many important perspectives and Vidhu’s answers to those were the highlight of the evening. There was an interesting conversation about business sense in Indian cinema. Vidhu has been successful with PK, 3 Idiots, Munnabhai etc. His movies seems to bring loads of money and deliver a social message as well. It was rare in Indian cinema. So what contributed to his strong business sense? Vidhu intact said that he had poor business sense. If he was to be interested in business, he should have made 4 Idiots and 5 Idiots after 3 Idiots. He cast Sanjay Dutt in the lead when he was undergoing trial. He made cinema for the sake of cinema. He wanted to deliver a good body of work and hopefully people will remember him. He is successful is a miracle, not a science.

Vidhu said that he has never followed a beaten path. Maybe because he has educated in school of life and not formal education.

Vidhu shared interesting anecdotes – the making of Kuch Na Kaho song, the revival of R D Burman, the fight for “Give Me Some Sunshine” song, the initial reaction to Munnabhai, his return to Kashmir to see his pooja room being cleaned and maintained neat by a namaazi etc.

On differences between West and Indian Film Industry, he noted that Indian industry was very warm but inefficient while Western industry was cold but very efficient. Indian cinema is improving but West is more professional.

Then, Professor Michael Hutt, Director of SOAS South Asia Institute, welcomed the illustrious guest of honor, Shri Vidhu Chopra and Professor Rachel Dwyer. In his welcome note, Professor Hutt noted that SOAS was the first British university to offer a degree on Indian cinema. He mentioned about the encouragement and support provide to Indian Cinema and South Asian Cinema at SOAS.

A 90 minute talk show was highly desirable. I am sure Sanam Arora and her wonderful team will listen to our wishes. They did a great job organizing this event !

One must credit to Vidhu for the great body of work – from Parinda to 1942 to Munnabhai to 3 Idiots to PK. He has allowed other talent to grow – Sanjay Leela, Raj Kumar Hirani, Pradeep Sarkar etc. Even Eklavya, Mission Kashmir, Ferrari Ki Sawaari were brave attempts. After 3 Idiots, he supported Sharman Joshi when the entire industry was waiting for his call.

He is releasing Broken Horses in India in English only – for proving a point that it is English movie. Not dubbed in Hindi. It is indeed risky. Ash thinks that when even Spiderman is released in Bhojpuri and South Indian Languages, he should reconsider this. Point is already proven I guess. James Cameron is endorsing Vidhu. Movie is ready. Point is proven.

Wishing him all the success. Broken Horses is a brave attempt. It is a statement. It is breaking new ground. And for that he deserves all our support !

Vidhu Vinod Chopra’s Broken Horses releases on 10th April 2015 through UTV Motion Pictures. Set in the shadows of the US–Mexico border gang wars, Broken Horses is an epic thriller about the bonds of brotherhood, the laws of loyalty, and the futility of violence.