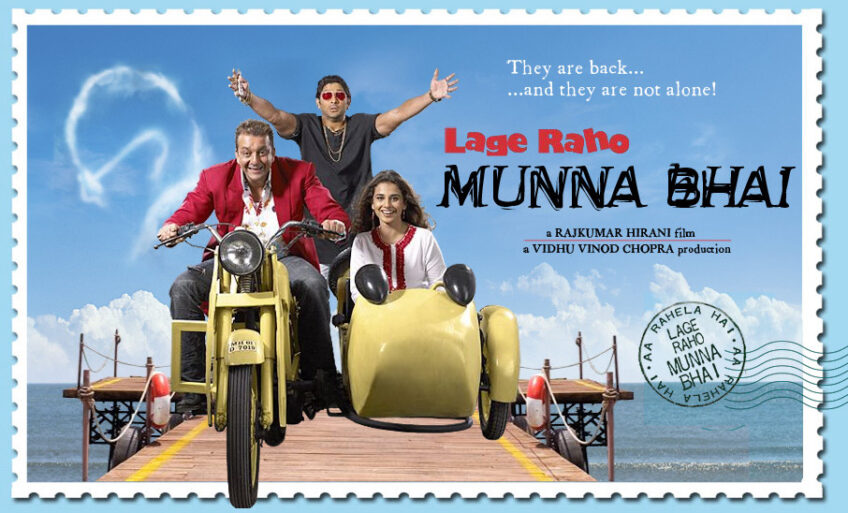 Mahatma Gandhi is one of the most significant and enduring gifts of India to the world. And so is Bollywood. How is the relationship between India’s biggest exports?

Mahatma Gandhi saw only two movies in his lifetime. The first was a Hollywood movie called ‘Mission To Moscow’. And the second one was the 1944 Indian movie ‘Ram Rajya’, which was directed by Vijay Bhatt. Thus, he saw only one Indian movie.

Let us look at representation of Mahatma Gandhi in movies.

Sir Richard Attenborough’s Gandhi – The Gandhi Movie of All Time

Let me first take Richard Attenborough’s Gandhi out of the way. This is ‘The Gandhi Movie of All Time’ – the one movie that everyone should watch!

It is an amazing epic of all time, a movie par excellence and a life story beyond imagination! Everyone was at their best in the movie –actors, director, producer, cinematographer, music director, costume designer. Nobody could have done anything less good for this project – It was a divine duty or a ‘Sistine chapel’ of their lives!!

The Gandhi movie swept all the major awards including Oscars, Golden Globe & BAFTA. It won the 8 Oscars including the Best Film and Best Actor. The movie had a very successful box office run across the world. In India, it had an ordinary response.

Richard Attenborough’s Gandhi is a moving experience. It transforms you. It keeps you engaged. It is one of the best tributes to Gandhi and his ideals. Ben Kingsley gave a performance of his lifetime. Ben Kingsley has Indian-Gujarati roots and his original name is Krishna Pandit Bhanji. Hence it was apt to see an Indian origin Ben play the legendary role. Rohini Hattangady, Amrish Puri, Om Puri and Saeed Jaffrey enact key roles in the movie.

The trivia of movie Gandhi are endless. One of the most interesting is that three lakh extras participated in Gandhi’s funeral procession scene in the movie. Only a few claimed the remuneration – everyone did it as their duty and tribute to Gandhi.

Growing as a young kid in late 80s, Richard Attenborough’s Gandhi was a constant fixture of your Doordarshan life. Every important day including October 2, 2019 would be the day to view Gandhi. And what gem we had been offered regularly – Maybe like other Doordarshan offerings like Tamas, Buniyaad, Yeh Jo Hai Zindagi, National Programme of Music, we ignored the priceless gift!

Richard Attenborough’s Gandhi remains one of most significant movies of our times. But Richard’s Gandhi is not a Bollywood movie. It is a British movie. Let us turn our eyes to Bollywood.

One of the first though indirect portrayal of Gandhi on screen was in the Dwarkadas Sampat’s 1920 movie ‘Mahatma Vidur’. The character Vidur was dressed and walked like Gandhiji.

The first significant Indian attempt on Gandhiji was by Shyam Benegal. The 1996 movie ‘The Making Of The Mahatma’ focussed on the 21 years of Gandhi’s life in South Africa and his transformation.  It is true that Gandhi discovered himself, his philosophy and political tools in South Africa. The movie is based on his South African experiences including the iconic incident of being thrown out of the train at Pietermaritzburg station. As Gopal Gandhi said later that the man who stood up from the fall was a revolutionary! Actor Rajit Kapoor did a splendid job and the movie is a great piece of work. The movie failed at the box-office though it won few awards.

Kamal Hasan made a movie named ‘Hey Ram’ in 2000 and depicted the struggle of a man trying to kill Mahatma Gandhi. Shah Rukh Khan and Rani Mukherji joined Kamal Hasan but they could not save the movie from tanking at the box office. Anupam Kher and Urmila Matondkar had used Gandhi’s killing as a backdrop Jahnu Barua directed 2005 movie ‘Maine Gandhi Ko Nahin Maara’. Anil Kapoor produced ‘Gandhi My Father’ in 2007. The movie was based on Feroz Khan’s play and was adapted for the big screen. The movie focussed on the troubled relationship between Gandhiji and his son Hiralal Gandhi. Many people amplified Harilal’s negative views on Gandhi – How ‘Father Of The Nation’ could not be a great father to his own son! But it backfired. The movie also bombed at the box office.

Movies on Gandhi were not getting enough Gandhis! (currency notes)

It had to take Rajkumar Hirani’s Midas touch to turn the tide. Leveraging his unique story telling skills and humour, he offered a completely new perspective on Gandhi. ‘Lage Raho Munnabhai’ did what thousands of historians, hundreds of books and several organisations could not do – bring Gandhi back in fashion. The simple story of a loveable Mumbai don using Gandhi’s principles to solve challenges and win his lady love. Munnabhai’s Gandhigiri was observed throughout the nation in ensuing months and years. It was Hiran’s excellent vision, script and direction that delivered a genuine blockbuster at the movie. ‘Lage Raho Munnabhai’ was the biggest hits of 2006. Producer Vidhu Vinod Chopra smiled all the way to the bank. More importantly, it made Gandhi cool and offered a great new alternative narrative and a perspective on Gandhi to the youth. He brought Gandhi out of the statues and photo frames and books into the lives of youth. A great achievement! The power of good cinema!

Amit Rai made a movie ‘Road To Sangam’ in 2009 starring Paresh Rawal and Om Puri. The movie focussed on immersion of the ashes of Gandhiji against a communal backdrop. Gandhi’s great grand-son Tushar Gandhi played a Cameo in the movie and it won several awards. But it was a box office disaster. Rakesh Ranjan Kumar’s  2011 ’Gandhi To Hitler’ is based on Gandhi’s letters to Hitler.

Apart from the above, Gandhi has been represented in biopics of other leaders like Shri Babasaheb Ambedkar, Iron Man Sardar Patel, Shaheed Bhagat Singh etc. Hollywood had made another movie called ‘Nine Hours To Rama’ in 1962 where Gandhi’s assassination was re-imagined and Godse was presented as hero. The Mark Robson directed film never released in India and tanked globally. It had no Indian actors.

Mahatma is under-represented in Indian film industry. The best work on Gandhi is by a non-Indian – Maybe an outsider had more courage and better perspective to make a film on Gandhi. The greatest film makers of our time in 1940s to 1980s never thought of making a movie on Gandhi. They must have thought – Gandhi is so much within us that we never need a movie for him. Gandhi is a family member of every Indian. What is there to tell about Gandhi that people do not know? The movie may not make money!

Dada Saheb Phalke, Bimal Roy, V Shantaram, Himanshu Rai, Chandulal Shah, Mehboob Khan, Raj Kapoor, Chetan Anand, Satyajit Ray, Hrishikesh Mukherjee – None of them made a movie on Gandhi. The movies till 1950s and 1960s had a lot of influence of Gandhian values but there was no Gandhi movie. The erosion of patriotic feeling, the rise of corruption, the arrival of angry young man, the liberalisation of economy, the excitement of millennium – different phases of a growing India. And all this while Gandhi remained in background in the cinematic world.

There were occasional trace of Gandhi. In Bimal Roy’s Nutan starrer Sujata, the main protagonist avoids suicide after becoming aware of Gandhi’s views on suicide and changes her life. Salim Khan Saheb had once commented that the pivoted character of movie ‘Imaan Dharam’ was inspired by Gandhiji. The protagonist of his movie ‘Kabza’ was also Gandhi. Ashutosh Gowariker’s movie Swades was influenced by Gandhian principles – Shah Rukh Khan is called Mohan in the movie. The interesting thing to note is that the movies on Gandhi and his philosophy are limited and lacking depth.

Interestingly, Charlie Chaplin was inspired by Gandhi and one can notice the influence in his film ‘Modern Times’. Charlie Chaplin had met Mahatma Gandhi in at a nondescript building at London’s East India Dock Road in 1931. The two had discussions on lot of topic including machinery, socio-economic conditions, philosophy of principles driving Indian Independence struggle etc. Charlie Chaplin’s memoir describe how he was transfixed to see Gandhi offer the evening prayers – a super intelligent being immersed in spiritual devotion! (An interesting point to note is the biopics of both Gandhi and Charlie Chaplin were made by one person – Sir Richard Attenborough.)

How would modern directors interpret Gandhi? We have had Love Stories and Lust Stories. How about ‘Gandhi Stories’ by Zoya Akhtar, Anurag Kashyap, Sanjay Leela Bhansali and Karan Johar? Or if Hollywood presented Gandhi through the eyes of Steven Spielberg, Christopher Nolan or James Cameron? Just imagine!