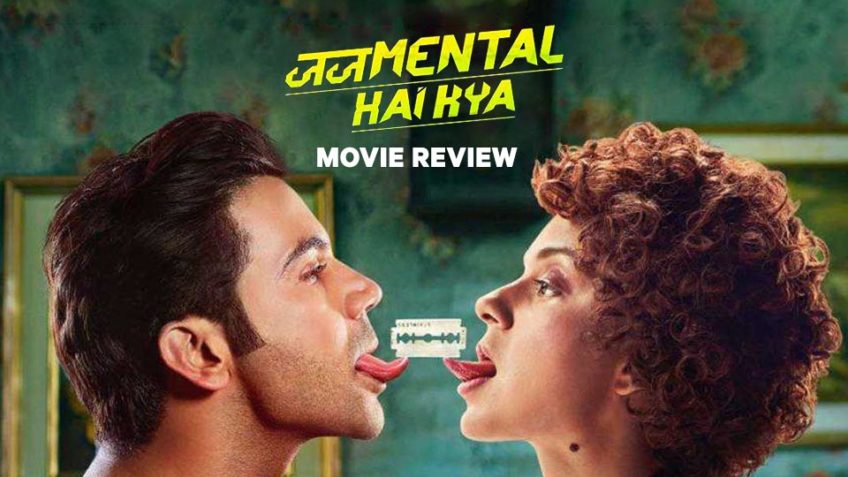 The new Bollywood is making brave choices and Judgementally Hai Kya is a shining example of the new experiments of Bollywood. It is a courageous movie – which will challenge you, divide you, confuse you! Better than ‘leave-your-brain-at-home’ cinema.

Kangana and Rajkumar Rao are at the top of their game. Both play the characters with impeccable conviction and bring out the multiples shades of the quirky characters remarkably. It is an ode to Kangana’s art that she looks so natural in the role. Rajkumar is a perfect match to her.

Kangana is suffering from acute psychosis and identity disorder. The troubled mind has a troubled past and a challenging present. Rajkumar Rao moves in as a tenant in the house with his wife – who is murdered. The movie catches edgy thriller style after the murder. The Ramayana theme is invoked in a modern style and Sita is seen as the victim of male violence. The movie keeps you guessing and your loyalties to the character are challenged again and again.

The director is the real hero. He paints the pain and anguish of the characters with rich colours and textures. The change in the backdrop and the mood of the film between Bombay and London is nice and consistent. The conflict and the struggles of a troubled mind are beautiful depicted in the title song – noteworthy are the street art that complement the mood of the mind. Spot on!

The director could not have asked for a better actor to demonstrate the anxieties and troubles of a psychotic mind. The scene where she explains that demons are following her – it affects you. She cannot trust anyone – the fall in the drama with Jimmy Shergill again explains the state of mentally unstable mind.

Kangana’s current off-screen controversies and perennial persona helping in adding richness to the character. Is she giving message from her real life – domestic violence, misunderstood, feminine voice? Who is the real mad?

The movie has its flaws. The second half is problematic. The Jimmy Shergill track is not given the proper treatment. The finale could have been better.

The jury is out on the choice of using mental health patient as the protagonist. I know that it has not depicted all the challenges of mentally ill patients – but I guess it was never meant to be perfect on technicalities. More importantly, I think it helps in opening a dialogue on mental health. Bollywood has impact in India that is too big. The movie is creating awareness of the challenges of mental health patients. It stops us from dismissing their problems as madness. It stops from being insensitive to their challenges. It helps in telling us to educate ourselves and be more sensitive about understanding the troubled minds.

The movie has taken the important topic of Mental Health and given it the right and sensitive treatment. The movie has a significant message for the world – mentally ill patients are different and need their space. Understand them, support them, lighten their mental distress and accept them unconditionally. And yes, do not be judgemental!

A must watch – a difficult watch, a complex watch – but yet a must watch!

The Art Of Living! When Your Fiercest & Greatest

We have an infinite capacity to love, but when you

The outer world is a reflection of our inner world