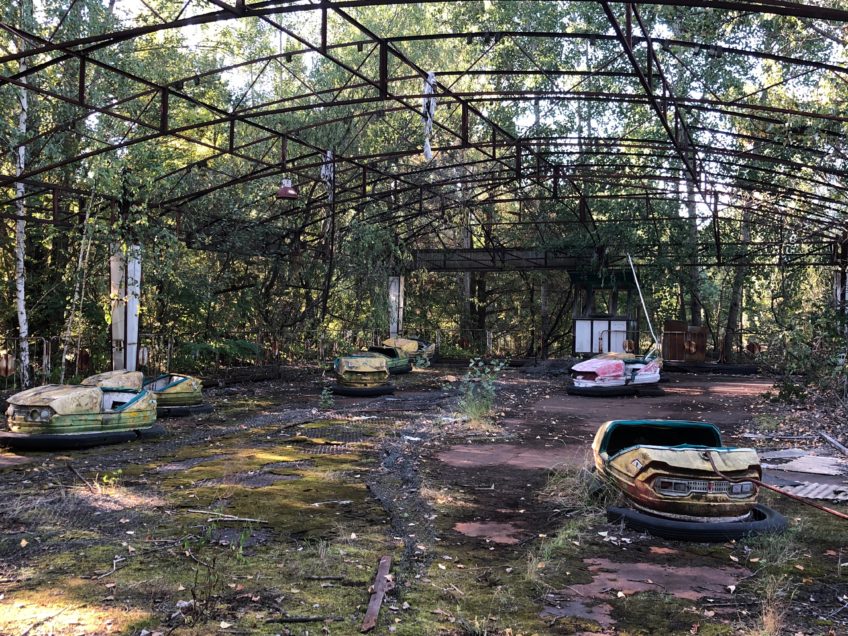 Chernobyl is back in news thanks to HBO series. Chernobyl is one of the most tragic events in our history. Chernobyl happened when I was in school. I was too young to understand it but we were all talking that something big and bad had happened.. I remember me and my friend Abhi reading the newspapers, watching TV and discussing this passionately. Since then a visit to Chernobyl was one of the things in my bucket list – yes I have an interesting bucket list.

I landed in Kiev for a trip to Chernobyl. Though Ukrainian authorities had started tourist activities in the Chernobyl since many years, it was recently only that Visa regime became friendly.

I reached the Kiev Central station after a quick ride in the Soviet style metro. The Chernobyl Tours are conducted by licensed agencies and instructors. I had chosen one of the local agencies and our guide for the day was Igor. The tour was only allowed to people above 18 years. Basic health criteria must be met. Currently, citizens of Russia and Belarus cannot visit the tour. There were 3-4 check-points to ensure that the compliance was met.

We got lot of instructions about the safety and do and don’ts for the trip. We were not supposed to put our clothing down on the floor or ground anywhere. We had to regularly measure radiation levels using Geiger counter. We could not touch the animals. We could go only in areas allowed for visits etc. We were not supposed to take anything from the nuclear site and town. No special souvenirs!

The big question was about the safety of the tour. The Chernobyl Zone and Prypiat town have high radiation but they are safe for human beings. One-day tour’s radiation is equal to the radiation experienced in one hour airplane flight. Or the exposure is 160 times less than X-Ray of chest. And we had Geiger meter to be sure. So the trip was safe. Or it means flights are not as safe as we think!

After the basic instructions and tips, Igor gave us the background about the Chernobyl accident including the technical details. The accident happened on 01:23 am on April 26, 1986. A power failure test was being conducted and an accident happened causing explosion during emergency shutdown. And one thing led to another causing uncontrolled reaction – water flashed into the site created a steam explosion. The fire produced plumes of fission products and the radioactive material moved towards USSR and Europe. The authorities either did not understand the gravity of the situation or they downplayed it. But they did not acknowledge the accident immediately – maybe a mistake in hindsight. In fact, the people in the nearby town carried on the life as normal. Nobody was told the truth. It was only after a week that people were evacuated from the nearby town of Pripyat which had a population of 49,000 people. The town was designed as a model town and was the town planned for the staff and families of people working at Chernobyl Nuclear Power Plant. It was Sweden which alerted the world about the presence of these plumes in the air. Then authorities had to acknowledge the accident. Belarus was the worst affected country as plumes moved towards that direction.

Back to the trip. The first stop was the checkpoint of Dytiaki. Our passports were checked. We moved to the abandoned villages. We could see the traditional houses, village shopping store, doctor’s house, kindergarden etc. The houses were in ruins. People were forced to leave quickly as a part of evacuation drive. The authorities had destroyed these houses to ensure that the villagers do not return. The area of villages was within the 30 km radius of the accident and it was a risk. Villagers were sent to cities but many villagers did not adjust to the city life and wanted to come back – but then government withdrew their pension and other benefits. So people were forced to go back to cities. Nobody liked it. The villagers did not like it. Nor did the hosts in cities. Apart from hotels and camps, authorities forced city dwellers to accommodate the refugees. After the destruction of the village by authorities, nomads, thieves and others came here to steal the remnants of the house. As people had left in a hurry, lot of goods were there in the house. TV, Fridge, expensive things etc. People stole the metals, wires etc. Whatever they could get. And whatever little was left, was destroyed by nature over the years. Wear and tear due to nature was the final act. I was pained to see images of kindergarden. The dolls, the story books, the cots for kids etc. Very Emotional. We visited more abandoned sites – all of which had similar and equally tragic stories.

The city of Chernobyl was chosen after proper research. The density of population was low. The land was not very fertile and hence could be used for industrial use. The nearest big city was Kiev – which was far away from the place. Hence USSR started to develop infrastructure – roads, schools etc. The construction of Chernobyl and Pripyat city began in 1970 and the power planned was opened on 1977. The second reactor was commissioned in 1978, third in 1981 and fourth in 1983. The Chernobyl accident happened on April 26, 1986. But still the power plant continued to work and reactors were active. The three reactors were decommissioned only in 1996, 1991 and 2000 respectively. The reactor two indeed had to be closed earlier due to faults. The reactor No.5 was scheduled for going live on Nov 1986 and No.6 in a short time after that – but the work was suspended and then cancelled due to the accident. The site is very high on radio activity. The isotopes have half-life of at-least 30 years. Hence Reactor No. 4 is enclosed in a concrete and lead sarcophagus. It is further covered by a large steel confinement shelter, to prevent further escape of radioactivity. The large arch-shaped steel case has costed almost 2 billion dollars.

The next site was the city of Pripyat. The city of Pripyat was the planned city. It was the showcase to the world. It hosted scientists, delegates, diplomats, politicians and other important people from all over the world. It was designed as a showcase city for the world. The chosen ones came to Pripyat as it promised a better life. The salaries at both Pripyat and Duga was higher. The best food, best hotel, best schools, best healthcare was made available. People came here for a better life. The city of Pripyat had a cultural centre, theatre, football stadium, wonderful roads, shopping centre, amusement park etc. It was planned for walking and bicycles – no vehicles. There was a nice river port. Everything was planned for future growth of the city. But man proposes, God disposes…

The accident happened on April 26 but people were not given any information. The life continued and thus it exposed everyone to grave danger. The people injured in the plant were brought to the hospital here and they brought radio active elements. Some people heard of accident and visited near a bridge to see the view of the power plant. They got infected as well.

In fact, big celebration was planned for May 1 celebrations and it continued. People had hoarded their houses with food and wine and other things for the celebrations. On May 2, people were told to evacuate the city. They were given 3 hours to take two bags as it was a short-term evacuation. The information was given at 11 am and evacuation happened at 2 pm. They were told that this was temporary evacuation and everyone could be back in 3 days – so people did not take much stuff. They were allowed 2 bags only. Thus people left everything important to them here including electronic items, expensive items etc. A man tried to stuff his favourite cat in the bag but could not do so. But nobody returned. It was sad. The first match in the new stadium was scheduled on May 2, 1986. But it never happened. The new Amusement Park was to open on May 1, 1986 but it also never opened officially. 1300 buses came to evacuate the 49,000 people from town. The buses took lot of time on the road – they were on the roads next to power plant for hours and just inhaling more injurious plumes. People suffer from lot of health issues including cancer due to the exposure to these plumes. All dogs and cats and other animals in the zone were found and killed. 70 Belarusian villages were buried under the ground.

Today, the city of Pripyat is a ghost town. Everything is decaying and rusting. Large trees have grown. The residence building, theatre, hospitals etc. all are crumbling. The liquidators have destroyed everything. And rest by scavengers, thieves and nature. The rusting ferris wheel has been a sign of ghost town Pripyat.

The next stop was Red Forest. It was very near to the Chernobyl Power Plant and the most infected area. It was the most dangerous area and has the highest level of radioactive elements. At the time of evacuation, buses were standing next to it in queues as the town was cleared. Even we could see that readings on Geigmeter increased from 0.1 to 25-30 even when were in bus and moving at full speed. Dangerous indeed!

The last stop was the monument dedicated to liquidators, fire-fighters and other rescuers. It was next to Chernobyl Fire station in the Chernobyl town. It was designed by amateurs and it was never commissioned by anyone. It was an impromptu decision and nobody questioned it.

Even today few people live in Chernobyl town. The people who are managing facilities at power plant, overseeing liquidation process etc. Some people are allowed back as 30 years has passed and the 30km radius is considered safe. Even a hotel has opened and people can stay there. Everything requires permission. No schools still as people below 18 years are not allowed.

The most surprising thing is that even today Ukraine’s 40% of energy needs are met by nuclear energy. There is no opposition to nuclear power plants. Ukraine exports nuclear energy.

Chernobyl continues to be the reminder of what can happen when things go wrong with nuclear energy…..