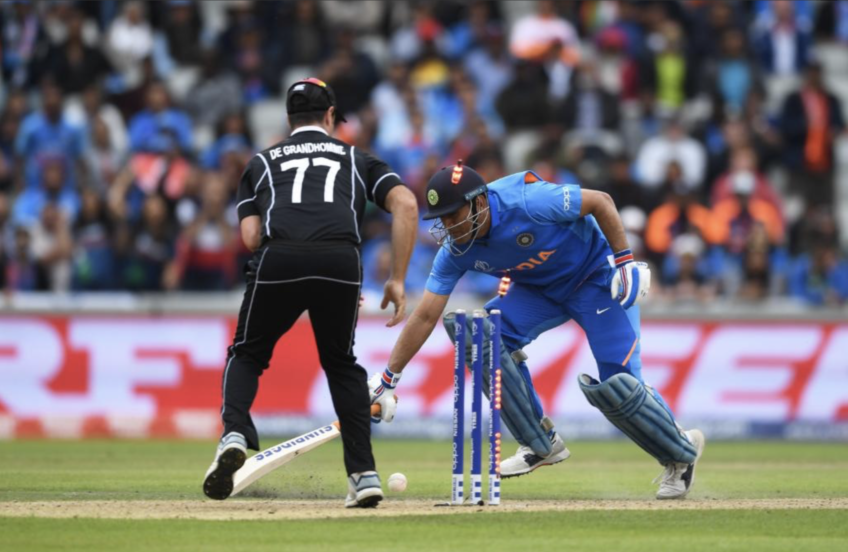 The World Cup 2019 Semi-final has silenced a nation of 1.35 billion people.

The India – New Zealand clash has prompted strong emotions across the globe. The fans’ reaction is a testimony to their love of the game and ‘Men in Blue’. One can discard their involvement and ideas as arm-chair suggestions but without fans, the game is incomplete. The game is a bigger game because of fan, and it unites everyone – delivery boy, CEO, office staff, families!

What else did I see in the India – New Zealand clash? What can be learn from it for our life?

Indian team showed no innovation. India stuck to their old ways. Same batting order except pushing Dhoni down. Dhoni should have risen up in the order and he would have anchored the batting. He would have stopped Rishabh and Hardik from rash shots.

Our Batsman played the same way as they did in earlier matches.

We all need to innovate in life. We cannot keep trying the same things every time. Our career requires us to develop new skills and bring new ideas to the table. Innovation is key to success in today’s world. We need to evolve!

We had a great opportunity in India vs SL match to give practice to others. But still Virat came at No.3 and so did others at their own positions.

In life our best planned ideas can go wrong. We need to have a Plan B. If our dream promotion does not happen, what do we do? If we do not get admission in IIM, what do we do?

The team came across as stubborn as well. The rains would have made the batting difficult was a given factor . But our earlier success blinded us to the new situation. Maybe we got overconfident. What has worked well would continue!

Respect the conditions. Respect the opponents. Every artist touches the stage before it performs on the stage – we did not kiss and read the pitch well.

It is not the strongest or the smartest that survives – it is the most adaptable that survives. We need to learn flexibility in life. Change as per the situation and circumstance. Do not be stubborn.

New Zealand was a disciplined outfit. The batsmen, bowler and fielder played to the strength. The bowlers stuck to the line and the length. The batsmen may have been slow but scored a decent score in the circumstances. The fielding was exceptional including the run-out that broke Dhoni’s stellar run and Indian hearts.

Indian batsmen were still in their flashy IPL mode. Rishabh Pant and Hardik Pandya could not control their natural instincts. Clearly Rahul was out of the place. We had our share of woes in fielding as well. Virat said that 45 minutes of bad cricket cost us the tournaments. That is what happens in life as well. One bad impulsive action or decision can cause greater regrets!

Whether is studies or financial planning, discipline goes a long way. Avoid flamboyance. Just do the job silently and consistently. The devil is in the details. Persistent efforts win!

New Zealand skipper deserves equal credit for the leadership he demonstrated. He was the captain cool. Not only did he read the pitch right, he played to the strengths. Kane Williamson outsmarted India tactically with the way he attacked upfront and the way he set the field. He was in action throughout out the match and encouraging the team. He changed the bowlers, backed the colleagues and calmed every one when Jadeja-Dhoni were on fire. His belief ensured that New Zealand was through the match.

Many people talked about the luck and the rains. A champion team does not need luck. And luck favors the brave and the prepared teams. Had India showed more steel and flexibility, the outcome would have been different. Luck helped Dhoni and Jadeja. But it also helped Guptill – whose run out was the worst thing to happen to India. Or Virat’s dicey wicket. But there are no other excuses – we lost on our own account. We were almost there…but New Zealand got it better that day! We should have not lost to England – we could have got another opponent!

But the most important thing is that India put a great emphatic show during the entire World Cup. All of us loved it and our team was the table toppers! We had a great semi-final as well where hopes were alive till the last over. It was Dhoni that gave us the belief that we could still have win probability of 70% at 5-3. And we got to see Jadeja’s striking response to Sanjay bits and pieces comment!

Rohit Sharma’s magnificent batting and Bumrah’s magical bowling will remain in our hearts and minds for long time to come!

Life is about wins and rising after each fall. Sports is the greatest teacher. This too shall pass!

Let us back the BlackCaps for a win! Cricket needs a new champion!

The Art Of Living! When Your Fiercest & Greatest

We have an infinite capacity to love, but when you

The outer world is a reflection of our inner world