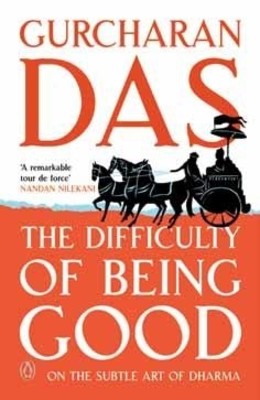 Gurcharan Das is one of the favorite Indian writers. I loved his India Unbound and I follow his columns as well. I read his book ‘The Difficulty Of Being Good’ this week.

‘The Difficulty Of Being Good’ explores the subtle art of Dharma. The book revisits the story of Mahabharata and presents it from the perspective of different traits of its characters. Envy, Courage, Revenge, Dharma, Remorse etc. are explored. The author also adds recents anecdotes of Satyam, Reliance and other events to give it a contemporary linkage.

The central theme is discussions around Dharma. Draupadi questions Yudhistir on what did he achieve after following Dharma? He got only grief and pain. She asks – Why be good? Yudhistira says – I act because I must. That is the central definition. Right Action itself is the reward.

Mahabharat concludes that wealth and pleasure follow Dharma yet Dharma is not pursued. Dharma means praying for well-being of others. Through thoughts, actions and speech, if we can do good for others, it is Dharma.

The common problem is that we would feel bad if we act according to Dharma and yet the other one is unjust. Or worse our opponent / rival, exploit our goodness. The response is again the same – Following Dharma itself is a reward. Of course, one should try to be smart. Mahabharata does not following Gandhian principle of offering the other cheek. (The book says that Gandhi succeeded because the opponent was Britain. British are rational and logical and workable. But it we had toxic terrorist regimes as opponents, Gandhi may not have succeeded. Who knows?)

Dharma in everyday life is doing one’s best. Living life with compassion and equanimity is vital. One could live life like a twig of tree and respond to the currents of life water appropriately.

The other interesting points are:
1. Mahabharat is ‘A series of precisely stated problems imprecisely resolved’ !
2. Time cooks us all. (Remember the opening of B R Chopra’s Mahabharat – Main Samay Hoon). Time cooks beings. Why would the war happen otherwise?
3. Mahabharata is a story of deception. Deception happens on both side. It might have been difficult for Pandavas to emerge victorious without breaking many rules. Killing of Drona, Karna and gunning down Bhishama were not according to the war rules. Krishna would term as strategic moves.
4. It is not easy to classify Kauravas and Pandavas as bad and good. The better word would be to state that Pandavas are the preferred side.
5. The claim of Pandavas to throne was never a clean one due to ambiguity of lineage. Strictly speaking, King Pandu had no sons.
6. Kauravas had deep envy of Pandvas. Author gives example of Ambani brothers. Envy kills !
7. Disrobing of Draupadi had many questions. How could a king who has lost himself wager his wife?
8. Action always beats inaction. Action is fruit in itself.
9. Yudhistira cursed that women will not be able to keep the secrets – that is where it started 🙂
He was not happy that his mother did not tell him about Karna.
10. Yudhistira has once to choose to save only his one brother from four brothers who are dead. He choses Nakula so that each of his two mothers have only surviving son. His sense of justice is exemplary.

I found it is as a different and interesting read. It reinforces the belief in doing our best and not worrying about results. It tells about pursuing the right path of Dharma. Krishna tells that it does not matter if you bend the rules for the righteous victory – I do not agree to this though ! The path is sometimes as important as the goal. Difficult in today’s times !

Though I believe Bhagwad Gita is the best management book. The central theme is Action ! Read my Bhagwad Gita review.

‘The Difficulty Of Being Good’ is worth reading for sure !