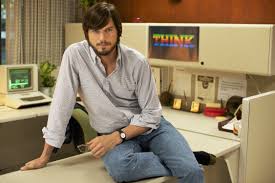 Jobs Movie is a big letdown.

I am an Apple fan. I am a Apple consumer since early 2000s. I have been interested in Steve Jobs, his leadership, his presentation skills, his innovation. I am aware that he was a flawed and an eccentric character. I loved Walter Issacon’s biography. Naturally, I was doubly excited about Jobs movie since its announcement – it married my two interests – Apple and Movies.

Jobs movie captures only some moments of Jobs’ eventful life. The events are also given a passing reference. Jobs life has a perfect screenplay, which is not exploited fully.

Apple produces glamorous products with story and magic around it, Jobs Movie does not !

Steve was a great marketer and a greater businessman. He had a strange ability to spot magic and push people to innovation. He rallied the troops at Apple and made it the most valuable company in the world. This is not captured in the movie.

I found that Woz was made to sound like a comical character – a second rung side-kick. Sculley episode was totally underplayed. The Lisa part was not given equal justice as well. The way Woz was cheated, or stock options denied to early members, making of Macintosh etc could have been effectively exploited. The dialogue between him and his designer at the end sounded very very fake and gospelic. You see that funny episode and other small moments like parking in disability spot.

Many people expecting to see iPhone, iPad and other stories will be highly disappointed. This is outside movie’s frame. So is his cancer episode. For non-tech masses and many emerging countries, the context will be missing.

The movie does not do justice to Jobs. It has many parts of his life but sum is lesser than parts. The movie could have been in the same league as The Social Network to become a business case study for leadership and technology business. It is not !

The genius is missing in the movie.