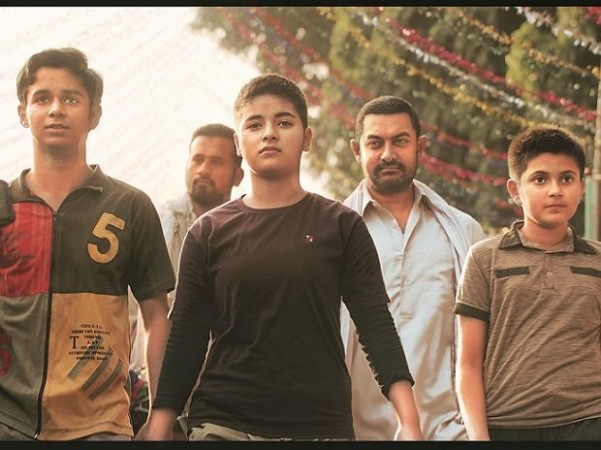 Dangal has its heart in the right place. The story of Mahavir Singh Phogat has been dramatised for entertainment purpose, but his and achievements of Geeta and Babbita are indeed inspirational. As rural and less-educated India learn to celebrate the female child, this is the strongest endorsement for the fairer sex. Especially coming from Khap-ridden state of Haryana.

The story is simple and everyone knows the eventual outcome. Mahavir Singh Phogat is a wrestler who gave up the sport for practical realities of life. But his hunger for winning the gold for the country remains and he aspires for a son to fulfill the dream. But the fate has other plans and he is blessed with four girls. An accidental altercation of children gives him the brainwave to train his daughters for wrestling and the rest of the film is about their journey to gold and glory.

The film scores on all areas – script, direction, casting, acting, authenticity (wrestling scenes) and succeeds in delivering the overall message.

Aamir Khan once again excels and proves why he is the best in the business. He lives and breathes the character of Mahavir Singh Phogat. It always has been his strength – to bring alive the characters but here he has set a new benchmark for himself. His physical transformation definitely creates an impact but it is his attention to detail (clothing, mannerisms, conversations, angst, hope) that steal the show.

The actors playing both junior and senior Greta and Babbita excel. And Amir Khan gives them space to shine – which is a triumph. Fatima Sana Shaikh, Sanya Malhotra, Zaira Wasim and Suhani Bhatnagar deliver great performance as senior and junior Geeta and Babbita respectively.

Pritam’s Daler Mehndi title song gives you the right adrenalin rush. Director Nitesh Tewari and the scriptwriters have done a great job to bring life to a predictable story. The father-daughter differences have been beautifully captured and strongly brought to life by the actors. The initial differences were brought out in a light manner but the young bride’s food-for-thought discussion make a transformative effect. The differences at the later stage get one of the strongest impact creating finale in a father-daughter fight. The emotional distance and the disappointment that follows has been beautifully captured.

The movie is a great watch but it is not a masterpiece. The editing could have been much crisper. The community stigma for girls wrestling as well the sports apathy in the administration are real challenges in India but they come across as common stereotypes.

As noted by Malay, we also saw people standing for the national anthem with pride during the Indian triumph scene in the movie. This act is more powerful than forced standing up for Indian anthem. Respect comes from within and can never be enforced.

Dangal is a great watch but it is not the perfect film. But is a movie with the right heart and the message that needs to be spread. Watch it!

Reading The Morning Newspaper Is A Prayer! The J

Ready! Run For A Cause! Walk To Make A Difference!

Working On The Future - One Child At A Time! Aha