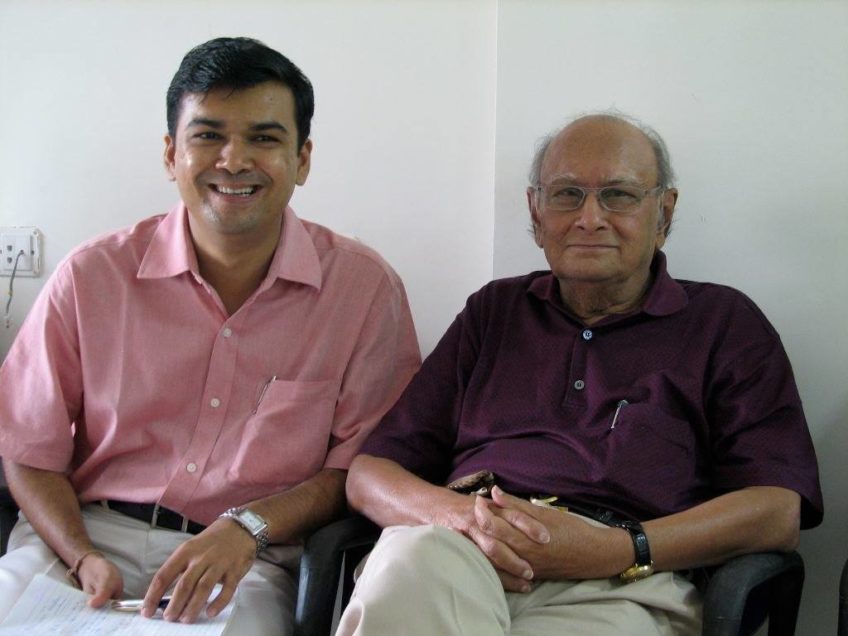 “You must remember that for a man like you to live in itself is a service to your country, for your life is not merely useful, but it is a light to others”
Rabindranath Tagore to G K Gokhale
Dec 1913.

Shri Ratilal Premchand Chandaria holds a special place in the hearts of innumerable people. For me, he is a father figure. Over the multiple projects and years, I came across the extraordinary individual that Ratibhai was. He was a person who was razor sharp in his thinking, intellect and memory. He was a person with tremendous zeal and energy. At the same time, he was a very kind and caring individual. He worked his entire life with the agility of a roaring tiger and lived his life with his principles – Ratibhaism.

The following are the important lessons that I learned from him:

1. Never Accept No For An Answer:

Ratibhai (Kaka) never accepted NO for an answer. His persistence is legendary. He would never leave any work incomplete. Whatever things he set his sight on, he would achieve. He would find ways to overcome hurdles. And he did not mind seeking help for achieving the goal.

He had given 20 years of devotion and dedicated service to GL project. 20 years is a long time – our experience of a little more than 20 months on Gujarati language had been very frustrating and thankless. He chased people in USA, UK, Canada, Germany, France, and India etc. He approached companies like Microsoft, Apple, Tata, CMC, etc. He achieved the GL mission and launched the GL project on Jan 13, 2006.

He went to Paris for developing a font. He went to Apple and sought help from them. On not getting the desired response, he found a few Indians in the Apple in an ingenious way. He persisted with these Indians in Apple to help him. He got contacts of a person in Paris working on Arabic Spellchecker. He went to Toronto to seek help.

Kaka could not accept No for an answer. At the same time, he was very hands-on. If things would not move, he would himself start working on it. He would often say to me – Aap Marya Vagar Swarge Javatu Nathi.

When he did not find enough experts, his assistant, his driver and he himself started typing the words. Kaka drove to Gondal to speak to the local team and seek help for digital rights of Bhagwadgomandal. If there were bottlenecks, he would visit people and start working on find ways. He would not wait for people to come to him. Beyond being Hands-On, he always believed in leading by example. His entire life he practiced what he preached.

3. Work For A Higher Purpose

Kaka and his family built a successful and sustainable business across countries. During the business time and after retirement, he contributed to the larger goals.

He has achieved something impossible – something which Universities or large companies or Government should be doing. Also, he was spending time on a collective good, rather than pursuing his business. Had he spent the same time and effort and passion on his business, he would have added more jewels to his business treasure. But he chose to work for his mother tongue. Everyday morning, he would wake up and check the latest statistics of the GL project.

In this world, many seek help. But few remember to thank people for the help they get. People are transaction-oriented these days. But Kaka remembered and thanked everyone who would help him. He would never forget anybody who stood by his side and helped.

Kaka always shared credit freely. Kaka met Dhirubahen Patel through some common contacts. He told Dhirubahen about the difficulty he faced. He told her that I fear I might die without seeing this project go live. Dhirubahen said that she would help. She got him help from many people to get the work checked. Kaka was very happy. When after some years, the project was complete and ready to be launched, Kaka expressed his desire to launch the project at the hands of Dhirubahen only. Friends and family had got many people invited at the event. Mr. Deepak Parekh of HDFC Bank and Dr. Viren Shah, Governor of Bengal were at the event. But he said that the project would be launched by only Dhirubahen and nobody else. Even the invite from CM Narendra Modi to meet him was converted into a courtesy visit and prelude to actual launch. And at the launch and even after that he expressed his gratitude for Dhirubahen.

Kaka encouraged women in all spheres of life. He was very happy that Arnion was formed with the entire Women Team. He was proud of the work done by the team. Kaka had a special respect for all women. It included Dhirubahen, friends and family members as well.

He even respected the contribution of Vijaya Kaki to his life. The surest way and the fastest way to make Kaka cry were to remind him about Vijaya Kaki. As Jan 26 approached, he would get emotional.

Kaka sowed, nurtured and grew relationships. He would make special efforts to maintain the relationship. He would take personal interest in people and their lives.

Even his late eighties, Kaka drove to Surat to meet his friend Uttambhai and spend an entire day there. He would be personally interested to know how did the knee surgery of Uttam bhai went. Every year Uttambhai and Madhu Aunty would go for a nature-therapy break and Kaka would ensure that he exchanged enough emails before those visits – so that he would not miss them. And he would wait eagerly for them to return and see emails of Uttambhai.

Whenever we would be in Ahmedabad, he would visit Kumarpalbhai, Prabhahben, and Kasturbhai. Tushar Bhatt and he exchanged some notes via email. Next time he was in Ahmedabad – he met him. He would talk to me on Skype and every few days he would ask me about Dhirubahen, Vipoolbhai etc.

Whenever he would return to India, I would get a call from his team asking me to meet him immediately. Whenever I would go to his Mumbai home, he would ensure that I had my favorite vegetables (I am a fussy eater) and there was a Paan for me to eat. We shared our love for Paan and Pani Puri. When he was outside of India, Skype would ensure that we remained in touch. When I went to London, he would prepare tea for both of us in the morning. When I went out of his home in London, he taught me to navigate London’s metro. He would wait for me to return home. He would sit late till night and talk. And his talks would be about Gujarati language, technology and helping people. He never talked about himself !

Kaka had a problem in hearing but he always listened to my heart. He would know of things that I never spoke. He would know my feelings and thoughts. He was always there for me – my marriage, birth of Aditya and other milestones of life. When my wife was pregnant, he wrote emails to her and after her pregnancy, he was the first one to visit her – even ahead of my other family members. Whenever I had to make any decision or whenever I was low – one Skype call to him and I would be clearer. He was my life mentor. He stayed at my house in Ahmedabad and time would fly. And so would Kulfis and Pans. He was a foodie and would love exploring good food.

Kaka was very simple. After my first year of marriage, I decided to go to Mahabaleshwar. Kaka was in India and asked whether he would like to join. He was hesitant as he did not want to intrude into my privacy. I assured him that we were 100% comfortable and hence inviting him. In fact, we would not get such a vacation with Kaka. However there was a problem. I told Kaka that I stay at a small mini-resort cum hotel at Hotel Uday in Mahabaleshwar. There is no 5-Star accommodation there. He said that he was more than happy to accompany us. However during the journey to Mahabaleshwar, he stopped at Pune and decided to visit CDAC. He went to CDAC and told them to help with OCR.

I have never heard any grudge or any ill-will Kaka had towards any family members. He would keep me posted about the activities in the family and it was his way of sharing joy. Whether it is the daughters of Kunteshbhai, or Sachin’s ventures or Jet-Ski accident of Vimalbhai, he would share it all. He loved talking about the family.

I can recount anecdotes and anecdotes on Kaka’s life. The fact is that I am yet to come across a person more humble than Ratibhai. He never speaks about his contribution, efforts, past laurels etc. He only wants to leave something for the future generation. We youth can learn the important lessons of dedicated service, relentless pursuit of goal, endless energy from him. His loving and caring nature adds another dimension to his greatness.

I was privileged to spend very close time with him. I and my team are indeed honored to make a small contribution to this great work. God has made him for a special purpose – he was indeed a divine soul. He wanted that this project touches as many Gujaratis as possible. He was recently working on making this available to all schools and colleges via Government education department. If we can achieve that, it would be a great homage to him. We pray that the project should reach maximum Gujaratis across the world, create more linguists and contemporarize Gujarati for the future.