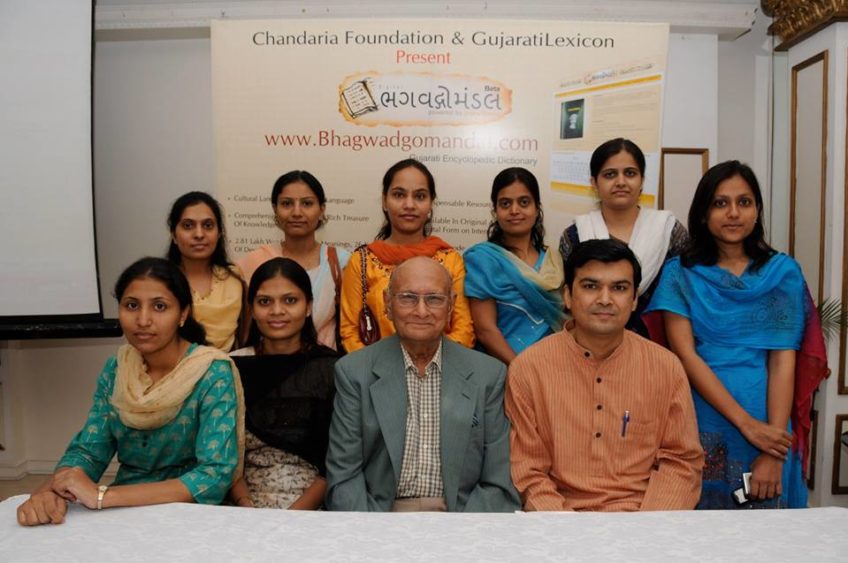 On Dussehra, October 13th 2013, Shri Ratilal Premchand Chandaria commenced his final journey exactly 91 years after he entered this world. Ratilal, known affectionately as Ratikaka or RP, has been an inspirational figure. He was a renowned visionary leader, industrialist and philanthropist. In his later years, driven by his passion for his mother tongue, Gujarati, he founded and was the force behind GujaratiLexicon, Digital Bhagwadgomandal and several other digital Gujarati Language initiatives.

Ratikaka was born to Premchand and Punji Chandaria on Dussehra. He undertook his primary and secondary education in Nairobi and Mombasa, Kenya. As an active Scout, he was associated with youth activities, sports & yoga. He was also a member of Nairobi’s Jain Youth League in its early days. At the beginning of the Second World War, he migrated to India along with his parents. In 1943 he married Vijayalaxmi, daughter of Fulchand and Devi Shah, in Jamnagar. Today he is survived by his 4 children and 8 grandchildren and 4 great grandchildren.

Instead of continuing his education, he joined the family business and ventured into marine and land transportation before quickly establishing an Import and Export business. Returning to Nairobi in 1946, he continued to develop the family’s activities through extensive travels in East and Central Africa, Australia and Japan. During the early fifties, the family diversified their interest from trading to industry in Kenya and other countries, and he moved to Dar-es-Salaam in 1960. To facilitate the family’s industrial expansion in Europe, he left for London in 1965. From there, he explored business possibilities in the Americas and stayed for a short period in Geneva before moving to Singapore in 1975 to expand the family’s activities across South East Asia. His entrepreneurial work spread the family’s industrial investments and interests around the world.

Apart from his business and industrial activities he has been associated with social activities at all stages of his life in various places including Africa, Asia, South East Asia, UK and Canada. This included working with organizations such as Mahatma Gandhi Awards, Indian Gymkhana, Jain Centre, Jain Fellowship Centre. Ratikaka always believed in using his time, energy, and talent for causes with a sensitivity to the community.

Ratikaka dedicated the last 25 years of his life in realizing his vision of using technology to continue the living tradition of the Gujarati language. His relentless passion and missionary zeal for language inspired many across the globe at various organizations. The launch of GujaratiLexicon on Jan 13, 2006 resulted in a mega language portal which has grown into the largest online portal for the Gujarati language with over 25 million visitors. This resource has revived an interest in the language and led to many further initiatives including Digital Sarth Kosh, Saras Spellchecker, Lok-Kosh, Crossword, Quiz, GL Gems, Kids Games and GL Mobile Apps and a digitized online version of Gujarat’s Encyclopedia, Bhagwadgomandal. This encyclopedia is archived in the US Congress Library and British Library Catalogue as a landmark Gujarati work. This has involved working with key partners including CDAC, GV, GSP and other organisations.

Ratilal Chandaria led his life by example, first as a joint family man who used his understanding of people to build a global, successful and sustainable business and his sensitivity to his roots to share his life work with others.

He leaves behind a rich legacy.