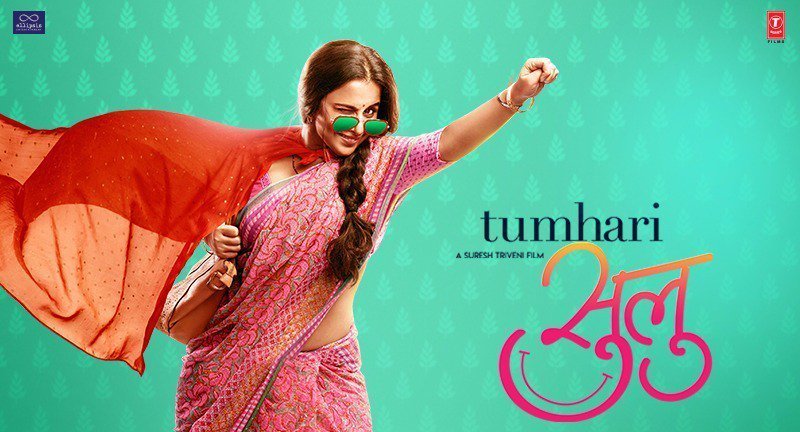 Tumhari Sulu is a warm slice-of-life movie that touches one’s heart. It once proves that strong content can triumph over XLS Template driven movies. Substance is more important than style. Art of cinema can be bigger than business of cinema.

No doubt Tumhari Sulu has a few flaws, but it has its heart in the right place.

Tumhari Sulu is a movie showcasing the victory of the suppressed voice. The triump of hunger to succeed and positive attitude – ‘Main Kar Sakti Hai’ being the slogan of the protagonist. But more importantly, it is a story of a family wanting to live a normal life, move ahead in life and their trials and tribulations. It is the story of any family and every family.

The movie begs us to answer a basic question: Is there a person behind the tag of a housewife? Or is she just a free maid who takes care of husband and childrens’ needs? Does she have talents that have been sacrificed for the success of children and husband? Can she win respect and success in the competitive world?

Sulu aka Sulochana is a middle class housewife living in distant Mumbai suburb of Virar. She has a very supportive husband Ashok who works in a family firm of uniform manufacturers and a school going son Pranav. Her sisters and father form the extended family. She has no friends that we see. She has pretty ordinary circumstances.

Amidst all this, Sulu aspires to do something. She poses with the handbag in the mirror or looks at Air Hostess neighbours with aspiration – beautiful small nuances. She wants to have her own career – in form of a job or business. She wants to try her hand at almost everything. She participates in the school lemon and spoon races, Radio Contests, society competitions etc. She has won lot of prizes and she is proud that she even won Antakshari contest while waiting for an audition.

The film stops of making her a funny caricature though her sisters never stop of ridiculing her. Things take a turn when Sulu decides to turn a radio jockey. The ‘never say die’ spirit of Sulu helps her land the job of a late night chat show host but she slowly starts owning the show and leaves her distinct impression. She successfully manages to avoid her producer’s cues for the show and that saves the show from becoming a cheap stereotype program. She has smart retorts for loaded questions and situations. Her the film fails as there are only two calls – this aspect could have been explored further and given us more insights into her transformation.

As she turns successful in her show and starts enyoying the success, her husband and son face challenges in their lives – another stereotype situation. Husband is humiliated in the family firm. His loyalty of 12 years is discounted as the family scion takes over the reins of the business. He has to manage household errands, work late in the office, give up his cabin, suffer ridicule for a cancelled order that was never his account etc. He faces loss of respect and he is hurt. The frustration is against the contrasting success of his better-half. The movie tries to avoid the trap of Abhimaan/English Vinglish stereotype. He is not jealous. He is supportive and appreciative husband. But there are issues as he fights his own reactions and society fuelled reactions to his wife. Sulu’s show gets bad spin-off in terms of the cheap SMS and forward factories. Her husband gets affected by this and tensions seem to develop. He is torn apart between his own hurt, his own frustrations and also managing to support his wife’s dreams without affecting her dignity. He has been a good husband – who does not mind massaging her wife’s legs after a long day for her. So he is modern and treats wife as equal in their beautifully agreed and adjusted world of Mrs & Mr Sulu. Do notice the song – Rafu – what a word. They have a fight and they patch-up – like a Rafu in our clothes. Impeccable!

The so-called elder sisters of Sulu having nice banking jobs cannot digest the success of the younger sister in a modern setting. They ridicule her for taking up a cheap and bad job. They again direct comments at her husband for allowing Sulu to take up such a degrading job. Very ironic as usually in-laws are villains – but here her own sisters are villains. Not surprising as real life has shown that sisters can be jealous of sisters and play politics within families. Great portrayal of reality.

At the same time, the son is facing bullying at school and shows how modern parenting can be a great challenge. And the temporary lapse of judgement by the son is conveniently directed to mother’s aspirations. The good husband also claims to take care of the future of son alone. A weak departure in the script.

Take the scene at the end where is goes to her boss and apologizes for resigning from the job. On one side of the frame is the modern, corporate, intelligent suave, successful, stylish, sexy boss Neha Dhupia. On the other side of the frame is not so intelligent, domestic, loud-mouth, dumbish Vidya Balan. The sincerity of the apology makes it one of the finest scenes in the recent times – she mentions how she never had allowed the lemon to fall from the spoon in her life, how she liked the perfume her boss was wearing on the first day, how she believed that she could do anything. That scene moves you and you want to hug her and do anything for her and make her successful – because if she does not win, we all lose!

Performances from everyone including Neha Dhupia as Maria, Manav Kaul as Ashok, Maurya as producer and all others are good. The sisters are perfect! A victory for casting. The songs are perfect – whether it is Hawa Hawai or Rafu – all take the story forward effortlessly and convey what the words cannot – another victory in this department as well for the movie.

Finally, the movie belongs to the director. He has created a masterpiece of human relations. He has created a voice for the silent majority of housewives – who are the catalyst and anchor of every successful family.

Tumhari Sulu is not a perfect movie. It could have been better. But it is a nice movie. Go watch it!